Opinion: Daniel Jones Is the Giant in NY Hearts 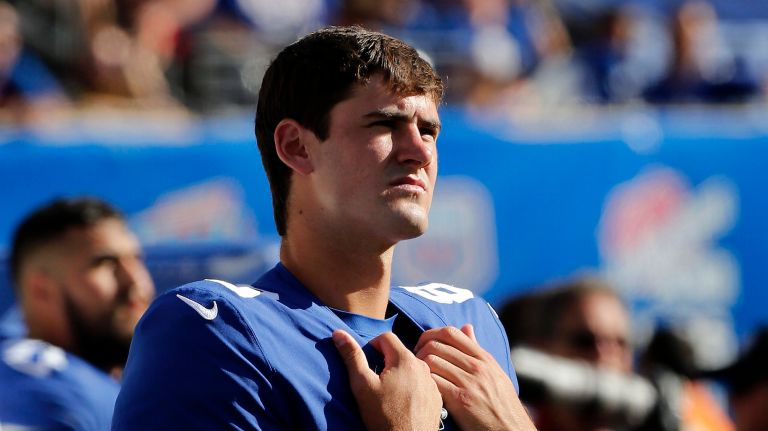 Of all the rookies heading into the 2019 NFL season, Daniel Jones had a strong argument for being the one facing the most adversity. Taking on the burden of being a top-10 pick, Jones immediately caught criticism as fans moaned that the Giants had “reached” by selecting him at such a high pick. Jones faced a battle on the field as well, heading into the campaign in a battle with Eli Manning that seemed to be placed in favor of the incumbent Manning from the first practice. Even the market he was drafted to presented challenges, as the media and fanbase in America’s largest city took aim at the newest heir to the throne of one of the league’s premier teams. With the conclusion of week 9, Jones’ is now halfway through his inaugural season, and there’s plenty to breakdown.

Winning Over The Fans

Before Jones could conquer the field with the Giants, he had to garner the support of the fans in the bleachers and on twitter watching him. And intentionally or not, this proved to be easy for the Duke alum. Adorned with affectionate nicknames such as “Danny Dimes” and “The Danchise Quarterback,” Jones’ cameos in preseason games and memorable performances in his first start against the Buccaneers quickly made him a cult hero amongst a fanbase eager to find a glimmer of new hope in a season that looked over from the first game.

Stats On the Field

This is where Jones’ case gets interesting. Despite being at a two week disadvantage due to not starting until the Buccaneers game, the Giants’ quarterback’s numbers for passing yards (1,676) and touchdowns (11) both come in at around twentieth in the league. These are relatively respectable for a first year player, especially considering  that he’s had to deal with an offence that’s been wracked by injuries and was never filled to the brim with raw talent from the start. However, in that same span he’s posted the 6th most interceptions (8) in the league and has also lost more fumbles than any other player (8). These conflicted numbers have led fans and analysts alike confused as to what to make of Jones’ performances so far, which leaves interpretation up to…

For me, the key question in evaluating Daniel Jones is “was he the right man to replace Eli Manning in the immediate and distant future?” And in my opinion, he has proven himself to be the right man, at least at the current moment. His speed and willingness to run has given the Giants offense a new energy and dimension that was never really present with Manning at the helm. The fumbles are a worry, but one could argue that they serve as evidence he’s willing to put his body on the line for the team, unafraid to deviate from only playing safe. This upcoming half of the season will be huge for Jones’ future prospects, as he looks to establish himself as a consistently quality quarterback and leader with New York.