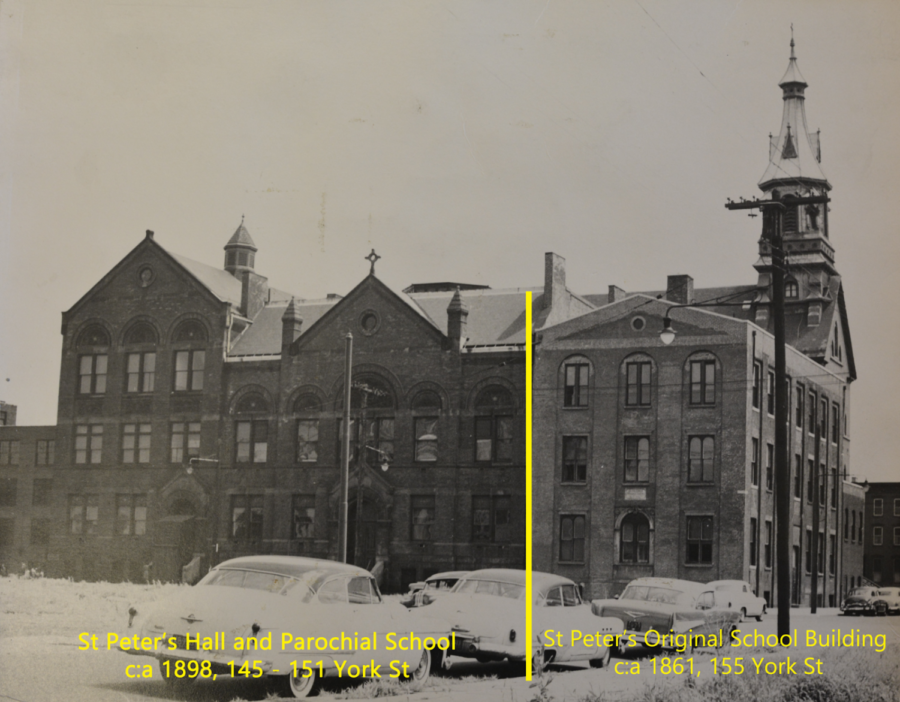 Last Wednesday marked Prep’s first annual Founders’ Day — a day to remember and celebrate our school’s history since its late-nineteenth century founding. Festivities included campus-wide scavenger hunt for photos of our nine Jesuit founders (with coveted Milano’s gift cards as prizes), a Prep history trivia contest with the top four homerooms qualifying for an Androball championship, a toast to St. Ignatius with sparkling cider in the courtyard, and more. As we approach Prep’s sesquicentennial anniversary, Founder’s Day is a great opportunity to look back on 147 years of history.

At its founding in 1872, Saint Peter’s consisted of three departments: Collegiate, Preparatory and Grammar. When the college closed during the first World War, the high school didn’t, and what was originally the college’s building — Shalloe Hall — is now the oldest building on campus.

The school has clearly undergone some architectural changes since the nineteenth century. Prep acquired English building, formerly home to the Academy of St. Aloysius, in 1924. The 1940s saw the construction of Hogan Hall, now the home of the history, math, and religion departments. Recent years have been busy with the addition of the Perkins Athletic Center and ongoing renovation on campus, so far on Hogan Hall and the Babbio, Sheehan, and Browning Center wings. Rumors concerning future renovations — and the fate of the inoperative St. Peter’s Grammar School facility — are frequent topics of conversation around campus.

Despite external differences, the values upon which Prep was founded continue to act as the beating heart of our school; the idea of “cura personalis” permeates Prep culture, with students and teachers deeply involved in academics, athletics, and countless student-run organizations and activities. Not surprisingly, many of the activities that define student life at Prep today have been around for quite some time — like Prep football, which made its debut in 1898, and the Petroc, which started up during World War II.

One of several hundred Jesuit high schools worldwide, Prep has over thirty alumni teachers and administrators who help carry on its unique identity, forming “young men of competence, conscience and compassion.” The opportunity to be a part of Prep’s rich history is something special. So here’s to the first annual Founder’s Day and many more to come.

Information on Prep History drawn from: